YOUR BROWSER IS OUT OF DATE!

Marvellous time to visit Bali. Join us for the most important Bali festival that takes place between July 15 and 25, 2015. Experience real paradise...

Visitors to Bali in mid-July will experience the tropical and welcoming island at its most colourful, as the festival of Galungan is celebrated from July 15 to 25.

Galungan is the most important festival for Balinese Hindus, and approximately equates to how Christian cultures celebrate Christmas. It occurs once in every 210-day cycle of the Balinese calendar, as the people honour their creator of the universe (Ida Sang Hyang Widi) and the ancient victory of dharma (good) over adharma (evil). 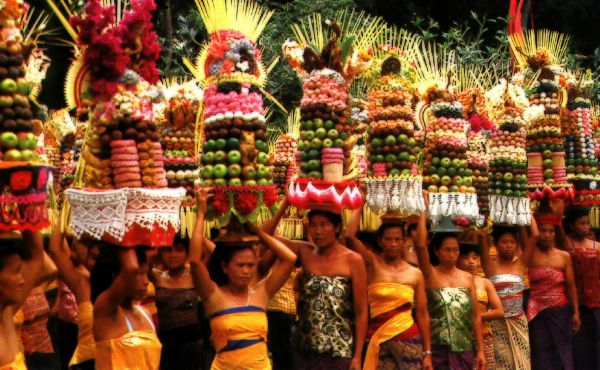 Galungan also sees the Balinese people honour their ancestors, whose spirits are believed to visit the earth during this time, and several rituals are performed to welcome and entertain these returning spirits. Preparations for Galungan begin in earnest three days before the festival actually starts, on a day known as ‘Penyekeban’.

‘Penyekeban’, which will fall on July 12, literally means ‘the day for covering up’, and this is the day when green bananas that will be used during Galungan are covered up in large clay pots to speed up their ripening.

The following day – known as ‘Penyajahan’ (July 13) – sees each family make coloured cakes known as jaja, from fried rice dough. The cakes will be used in offerings and are also eaten in large quantities during Galungan itself.

The day before Galungan is known as ‘Penampahan’, which translates to ‘Slaughter Day’, as this is the day that the Balinese people will slaughter the sacrificial animals that will go into the temple or altar offerings. It also sees tall bamboo poles called ‘penjor’ being erected outside every family home. This are usually decorated with flowers, fruit, or coconut leaves. Bamboo altars are also erected at each gate, and woven palm leaf offerings for the spirits are laid out upon them.

Galungan day itself (July 15) is the day for formal celebration of the legendary battle of good against evil, and the spread of Hinduism in Bali. Ceremonies and prayers take place at family shrines and all the temples on the island. Balinese women carry offerings to the ceremonies on their heads, while men bring palm fronds.

The following day, called ‘Galungan Manis’ (‘Sweet Galungan’) is when Balinese families traditionally take time off to visit relatives or enjoy other family outings. Several often choose to spend the day on the beach, as swimming in the ocean is a symbolic way to wash away bad energy and bad spirits. 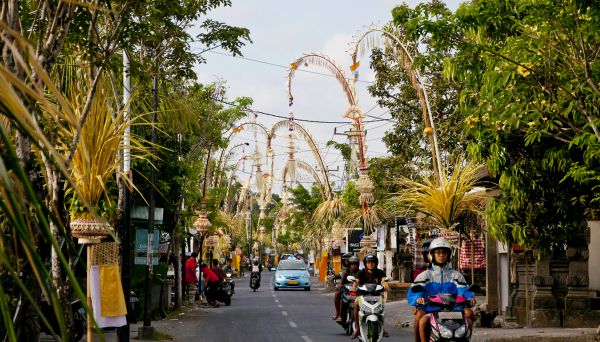 During the remaining days of Galungan, ceremonies known as ‘Ngelawang’ are performed across the island. They are essentially a form of exorcism performed by a ‘barong’ – a divine protector who takes the form of a mythical beast – who is invited into houses as he makes his way through a community. It is believed that his presence restores the balance of good and evil in that house. Families will pray before him during his visit and make an offering as he leaves.

Galungan finishes on the tenth day, known as ‘Kuningan’, when the spirits are believed to ascend back to heaven. Special offerings of yellow rice are made to mark this.

Overall, Galungan represents a marvellous time to visit Bali and see the island and its people at its most cultural and colourful. Tourists are welcome at all ceremonies, and an added bonus is the availability in many restaurants of a wider range of traditional Balinese dishes than at any other time of year.

If you’re not there to witness it this time round, the 210-day calendar means that Galungan will be celebrated in Bali twice during 2016: from February 10 to February 20, and again from September 7 to 17.

Bali holiday of your dreams awaits! Minimum fuss and maximum satisfaction guaranteed! All you’re expected to do is relax and enjoy yourself!

BALI HOLIDAY OF YOUR DREAMS AWAITS!

TAKE A TOUR AROUND VILLA KOURU

×
Our website uses cookies to improve your browsing experience. We'll assume you're OK with this, if you stay.ok, hide this message